It isn’t often that FIFA bans a football kit. In the case of Cameroon, the country’s national team has two banned football kits. Both are incredibly memorable nonetheless.

In the late 1990s and early 2000s, Puma began working with a number of African nations to produce kits. It was a time when Puma wasn’t to the standard it is now and the company was able to capitalise on working with African footballers. In 1997, Puma and Cameroon began working together. 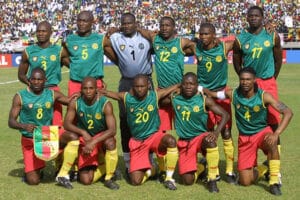 In 2002, Cameroon qualified for the FIFA World Cup, but prior to the tournament, the national team played in the African Cup of Nations in January. The tournament saw Puma and Cameroon launch the “sleeveless shirt”. The infamous jersey got the “sleeveless” name due to it literally having no sleeveless. The top looked more like a basketball jersey or sleeveless training top.

No football team, club, or national side, had played in a sleeveless jersey before. So, before Cameroon could play in the World Cup, FIFA put it on the banned football kits list. FIFA justified its decision by stating the World Cup patches couldn’t be placed on a shirt without sleeves. Puma later added black sleeves to the shirt which completely changed the landmark design by Puma. Today, the sleeveless shirt is just a footnote in football history. 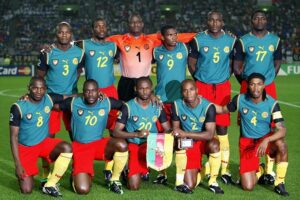 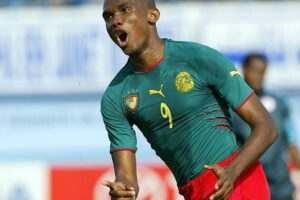 Just a few years later, Puma and Cameroon launched the “onesie” kit. Yes, that is right, Cameroon’s stars wore the onesie for football. The kit was aracing leotard much like the ones worn by Olympic sprinters. in green and red. No football kit provider had launched a kit like the onesie before. Shortly after Cameroon wore the kit during the African Cup of Nations 2004, FIFA ruled that all kits had to be made up of separate material, i.e. shorts, shirts, and socks had to be distinct pieces.

Cameroon wore the banned football kits anyone and FIFA handed down a World Cup qualifying points deduction. Since then, Cameroon have not fought FIFA over kits.